We have here photographs from an original published programme covering three concerts in the Fifth Season of the ‘Liverpool Symphony Orchestra Ltd’.  The second of these was a concert in the Sun Hall, Kensington, on Monday, 19 October 1908 commencing at 8 pm, the latter half of which was works by Samuel Coleridge-Taylor, conducted by the composer himself.

Coleridge-Taylor’s work was already by 1908 known to Liverpool audiences. Parts of his Hiawatha Op.31 had been performed in the ‘old’ Philharmonic Hall (which was to be destroyed by fire in 1933). That concert series was promoted by the Liverpool Philharmonic Society. 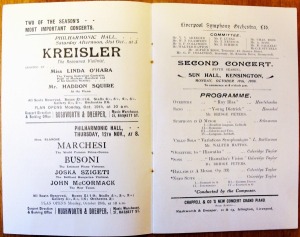 It is striking that this is a programme was performed in Sun Hall, Kensington by the (then) Liverpool Symphony Orchestra at much the same time as artists such as theba renown violinists Fritz Kreisler (on 31 October) and the then-still-teenage Joseph (Joska) Szigeti (on 12 November, along with the pianist Ferrucio Busoni and tenor John McCormack) were booked to play at the pre-war Philharmonic Hall in Hope Street.