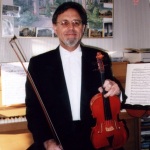 Ten years ago today (7 November 2001) was the first performance in living memory of Samuel Coleridge-Taylor’s Piano Quintet, op.1.  The work was part of a lunchtime recital programme by players from the Royal Liverpool Philharmonic Orchestra, from a score discovered and prepared from the original by Martin Anthony (‘Tony’) Burrage, an RLPO violonist, and director of Live-A-Music / Ensemble Liverpool, the chamber group which gave the concert.

This Liverpool Philharmonic recital was the culmination of work throughout the 1990s by Tony Burrage to identify and explore specifically the chamber music of Coleridge-Taylor and to consider it alongside some of his English-speaking (near) contemporaries.

Coleridge-Taylor’s early works were for chamber ensembles – probably the only performance forces available to him at the time. These works lay almost completely unacknowledged for the best part of a century. The Opus 1, or first formal work, Piano Quintet was resurrected from total obscurity by Martin Anthony (aka Tony) Burrage (a violin and piano graduate of the Royal Academy of Music and member of the Royal Liverpool Philharmonic Orchestra), as Director of Ensemble Liverpool / Live-A-Music. This ensemble recorded the Opus 1 Piano Quintet in 2001 at a concert on 7 November in Liverpool’s Philharmonic Hall.

Also recorded at the Liverpool Philharmonic Hall concert was Coleridge-Taylor’s 1895 Fantasiestucke op.5 for string quartet (first performed in modern times by Ensemble Liverpool / Live-A-Music, in 1993 to mark the Cornwallis initiative in Liverpool from a score also discovered by Tony Burrage, and originally published in 1921). The Opus 1 and Opus 5 pieces have also been performed elsewhere by Ensemble Liverpool / Live-A-Music, including during the 2002 Three Choirs Festival in Worcester, as part of the Ensemble’s Across the Divide programme of works by a diverse range of turn-of-the century English speaking composers: Amy Cheney Beach (1867-1944), Coleridge-Taylor himself, William Hurlstone (1876-1906), Dame Ethel Smyth (1858-1944) and Sir Charles Villiers Stanford (1852-1924).

[Copies of a 2001 live concert recording of some of Coleridge-Taylor’s chamber music can be accessed via the Royal College of Music (RCM) and the British Library.]

The first ever public performance of the Piano Quintet Op. 1 was on 9 October 1893 in Croydon Public Hall, when the young composer himself played the piano part. (Other performers included a string quartet actually led by a woman, Jessie Grimace.) The concert came about as a result of Coleridge-Taylor’s newly acquired status as a Royal College of Music composition scholar.

This experience must have been a huge ordeal for the shy eighteen-year-old, as yet barely acquainted with the ways of the London conservatoires (it is said he hid from everyone immediately after the concert); but it was, in the words of the Croydon Advertiser, an ‘astonishing’ event which left no doubt about either the performing capability or, even more strikingly, the compositional talent, of the retiring young man who was able even so early to produce an entire concert of his own work.

The Opus 5 Fantasiestucke, composed just two years after the Piano Quintet, was first performed on 13 March 1895, at the Royal College of Music in London. The work, in five movements, is dedicated to Coleridge-Taylor’s composition teacher, (Sir) Charles Villiers Stanford. One tangible result for Coleridge-Taylor of this early performance was winning the Lesley Alexander prize for composition (£10, a very useful sum at that time for an impecunious student); and another was a ‘quite brilliant’ Spring report from his RCM teachers.

After his first engagement with chamber works – including the Clarinet Quintet, also of 1895 – Coleridge-Taylor veered towards wider forces and the more popular end of the musical spectrum, perhaps because of financial pressures.

We shall never know if, like some other composers, Samuel Coleridge-Taylor would have returned to the more intimate focus of the chamber ensemble in later maturity; but some performers of these early pieces like to think he would have done so.